Fleas are a common pest problem for many households, especially those with pets or those in rural farm areas. While we normally think of fleas as pests that cause discomfort by biting, they can also carry several diseases. Flea treatment for your pets and indoor and outdoor pesticide treatment. Regular house cleaning methods, such as vacuuming, can also control fleas and reduce their occurrence.

Cat fleas are the most domestic flea. Contrary to their name, they are found on both cats and dogs. They are brownish black to black and can jump up to six inches. These fleas can also transmit the plague and tapeworms.

Dog fleas are commonly found on both dogs and rabbits. Like the Cat Flea, they are brownish black to black. They are typically found where animals are present, but do not require pets to come into the home. Dog fleas can carry disease organisms that cause the plague, typhus and can also host tapeworms.

As the name would suggest, Human Fleas frequently occur on humans in poor sanitary environments, also infesting pets and domestic animals. They are reddish brown in color. Unlike other types of fleas whose bites are concentrated on the lower legs, human flea bites are generally distributed over the human body. Their bites can cause dermatitis and allergies.

These fleas are best-known as the carriers of bubonic plague from rats to humans. They are found worldwide as well as in the United States, especially in seaport areas. They are reddish brown in color, and primarily feed on rats. 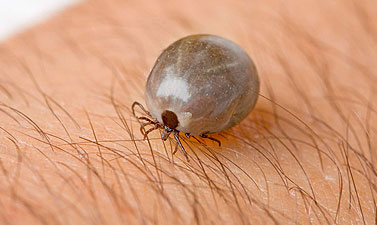 Lone Star ticks are marked with a distinctive, silvery spot on their oval, brownish-black bodies. Typically found in damp, shaded areas, these ticks are known to attack humans more than any other tick in the southeastern region of the United States. They are carriers of tularemia and are a cause of tick-paralysis. They are also minor carriers of Rocky Mountain spotted fever and Lyme disease.

This tick is known for its black legs in contrast to its body, and its preference for the white-tailed deer as a host. They are found throughout the eastern and mid-atlantic states, in transitional vegetation areas such as a forest edge. Deer ticks are carriers of Lyme disease, anaplasmosis and babesiosis. They are oval and orangish brown, except for their legs.

As the name implies, these ticks are only found in North America and prefer attaching to dogs. However, they are commonly found on both dogs and humans. They have an oval shape and are brown with light gray markings. The American Dog tick is also the primary carrier of Rocky Mountain spotted fever.