There are multiple species of ants that inhabit the Northeast Georgia area year round. While some are more prevalent than others, there are certain ant pests that can be properly controlled with an ant treatment and control program, or a quarterly pest management program. 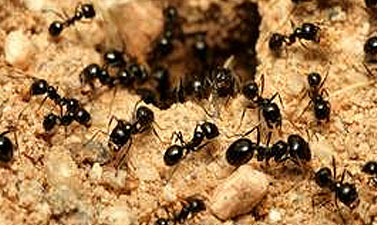 The Argentine ant, Linepithema humile, is native to Argentina, Brazil and Uruguay. Colonies are prevalent in the southern states, as well as in California and Hawaii. Their bodies vary from light to dark brown and lack a stinger. Nests are shallow and are typically found in damp areas, such as under plants or stones. These ants invade buildings in large numbers when weather conditions are too cold, wet or dry.

The odorous house ant, Tapinoma sessile, derives its name from the rotten odor it emits when crushed. They are a structural-invading species found throughout the United States. They are brown to black in color and lack a stinger. Colonies typically contain a few thousand ants, that situate their nests under objects such as lumber and bricks. They tend to move their nests in response to rain, and invade homes when their food supply is low.

The little black ant, Monomorium minimum, is dark, tiny and found throughout the United States. They nest in woodwork, masonry and outdoor wooded areas, and often build trails along foundation walls and sidewalks. These ants primarily feed on grease, meats, produce and sweets.

Acrobat ants, Crematogaster spp, comprise several species that are found throughout the United States. They typically nest in high moisture, decaying areas including wooded areas, Styrofoam insulation and abandoned insect homes. These ants feed on live and dead insects, and have a moderate preference for sweets and protein-rich foods.