Fire Ants get their name from the venom injected by a stinger that leaves a burning sensation followed by tiny, itching bites. They are aggressive ants that swarm over anything that disturbs their nests, which can be an unpleasant surprise if accidently stumbled upon. They can cause damages to crops, building structures and electrical equipment which makes these pests an even bigger problem. 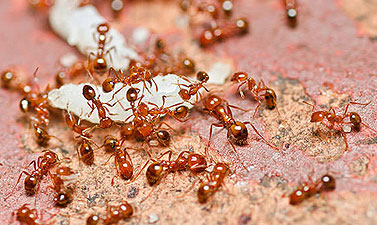 The southern fire Ant, Solenopsis xyloni, is a native species of the United States which occurs from North Carolina south to northern Florida, along the GulfCoast and west to California. The head and thorax of a southern fire ant are yellowish-red and its abdomen is black in color. Southern Fire Ant colonies may be constructed as mounds or more commonly found under stones, boards, and other objects used as shelter. These ants also nest in wood or the masonry of houses, especially around heat sources such as fireplaces. Colonies usually are made of loose soil with craters that are about 2 to square feet in size. Southern fire ants swarm in late spring and summer.

The tropical fire ant, Solenopsis geminate, is a native species of the United States that is also found in the Southeast from North Carolina to Texas. The tropical fire ant is very similar to the southern fire ant and usually nests in mounds constructed around clumps of vegetation, but may also nest under objects or in rotting wood.

The red imported fire ant (RIFA), Solenopsis invicta, was introduced from South America in the 1930s by shipping transport. RIFA build their colonies in cleared lands that have access to direct sunlight. They build mounds that are, on average, 10"-24" in diameter and 18" high. Red imported fire ants respond to disturbances of their mounds, like other fire ants, and can reproduce and spread quickly causing an infestation in an area.