The Southeastern United States is no stranger to mosquitoes; they appear like clockwork as soon as temperatures begin to warm in the spring. Health issues cause this pest to not only to be a nuisance but also a threat to health safety. Through source reduction methods and treatment programs the threat of mosquitoes can be diminished and allow for safe outdoor enjoyment. Learn more about American Pest Control mosquito removal and reduction methods to become better acquainted to our procedures. 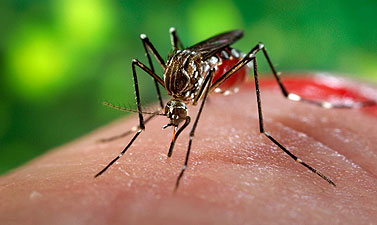 Mosquitoes have been an issue in Georgia since the arrival of the English settlers. The state annually spends approximately $125,000,000 for mosquito control in order to reduce the threat of disease and nuisance caused by mosquitoes. Currently there are 63 known species of mosquitoes in Georgia.

Mosquitoes are small insects ranging from 1/8 to 3/8 inch long with two wings, body and legs covered with scales. Most mosquitoes are gray or black, while some are marked with white, silver, green or iridescent blue scales. They have a proboscis/beak with piercing-sucking mouthparts. Male mosquitoes typically feed on the flower nectar and other sugars in the environment. Females also feed on nectar and other sugars, but they require blood prior to laying eggs. The protein in the blood is needed for egg development. The flight range for adult mosquitoes can vary from a few hundred feet to over one hundred miles with favorable winds.

When and where are mosquitoes found?

Mosquito season in Georgia can start as early as March and go nearly the rest of the year if temperatures are warm. June through September are prime months in most areas. Most mosquito bites take place in the hours between dusk and dawn, however; there are some species that are active during the day.

Mosquitoes are mostly found in areas used for breeding and resting. Since mosquitoes breed in water any area of standing or stagnant water is essential for egg, larval, and pupal stage development. The best way to prevent mosquitoes is to remove or dispose of containers that retain water. Mosquito resting sites include shaded and damp locations such as thick foliage, under decks, patios, mulch, and high grassy areas.

What are the health risks and symptoms from mosquito bites in humans and animals?

Mosquitoes are one of North America's most dangerous pests. Some species carry and transmit West Nile and other viruses that cause encephalitis, or swelling of the brain and spinal cord. It is estimated that 1 in 150 persons infested with the West Nile virus Zika Virus will develop a severe form of the disease. Dengue is a viral disease, commonly called "break bone fever." Eastern Equine encephalitis (EEE) is very similar to the West Nile virus, however; it more severe with a human-case fatality rate of over 50%. LaCrosse encephalitis virus symptoms range from mild and transient aseptic meningitis to severe encephalitis and death.

Mosquitoes are also a major health issue for dogs, cats, and livestock. Heartworms are a serious disease for all breeds of dogs. Horses are also at a health risk of being infected with Eastern Equine encephalitis.

What mosquito species in Georgia cause the most problems?

Lone Star ticks are marked with a distinctive, silvery spot on their oval, brownish-black bodies. Typically found in damp, shaded areas, these ticks are known to attack humans more than any other tick in the southeastern region of the United States. They are carriers of tularemia and are a cause of tick-paralysis. They are also minor carriers of Rocky Mountain spotted fever and Lyme disease.

This tick is known for its black legs in contrast to its body, and its preference for the white-tailed deer as a host. They are found throughout the eastern and mid-atlantic states, in transitional vegetation areas such as a forest edge. Deer ticks are carriers of Lyme disease, anaplasmosis and babesiosis. They are oval and orangish brown, except for their legs.

As the name implies, these ticks are only found in North America and prefer attaching to dogs. However, they are commonly found on both dogs and humans. They have an oval shape and are brown with light gray markings. The American Dog tick is also the primary carrier of Rocky Mountain spotted fever.